The 2013 Drishyam proved to be one of the best Indian thrillers in recent times with its brilliantly woven game of visual deceit. It challenged the boundaries of a common man’s quest to save his family from the traumas of an unfortunate incident. The ending was perfect. It was something that puts an end to a tale without a tail. But for Jeethu Joseph it was not the end. So, the sequel comes back as a challenge of its first installment. A sequel which I sat down to watch with much reluctance and didn’t expect to be something I deserved.

The Plot of Drishyam 2

So, it begins with a man-hunted convict suddenly coming across Georgekutty while he was coming out of the police station after burying Varun’s body. The guy gets arrested that very night. Cut to another 6 years, Georgekutty and his family are still living a life in a constant state of trauma. While we see Georgekutty has now emerged as a businessman, theatre owner, and soon-to-be producer, it changed people’s sympathy towards the family into envious gossip-mongering.

People still feel he has killed the boy and play guesses where the body could be while tarnishing the family’s image when potential marriage proposals turn up for Anju. Rani and Anju still have sleepless nights. Anju’s condition has worsened as she suffers from dissociative seizures due to PTSD. Among all this, we still find a phlegmatic Georgekutty trying to keep his family off the thoughts of that unfortunate night. He seems to be concentrating on developing a script for a movie and has already lost more than a million in it. 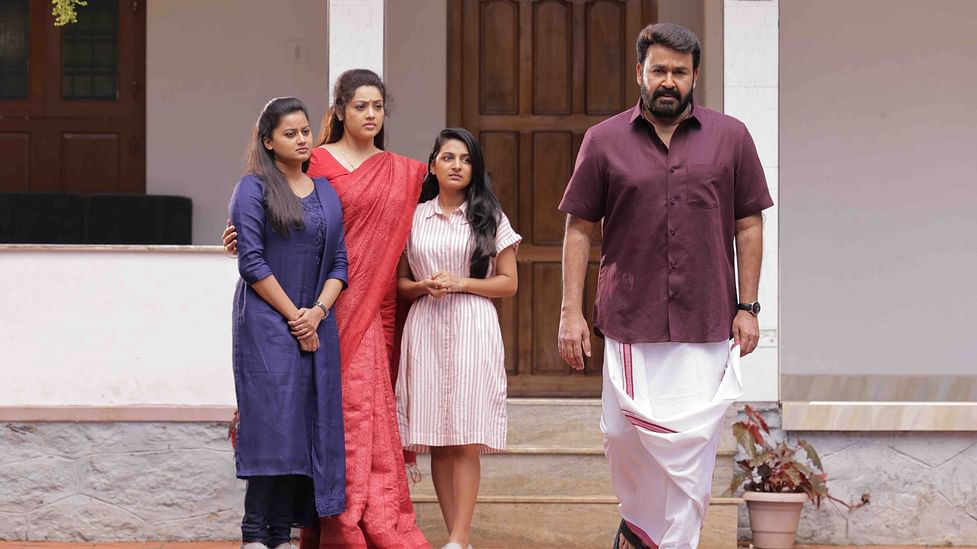 Amidst this struggle, the family is being watched covertly by the police which they stay unaware of until those nightmarish investigations get forced on them again. What follows next is another series of unexpected events, where the plot confuses the audience and keeps them guessing and thinking about every move Georgekutty is making. The movie keeps the thrilling essence of its antecedent. The townspeople, along with the police, engage the audience in a Russian roulette of a guessing game, thrown in a chiaroscuro of cluelessness.

The plot could have been a bit crisper and few portions from the first half of the movie could have been shortened if not removed. I found the movie really dull and my expectations were stooping lower until it picked up pace about one hour into the movie. The first movie felt more streamlined with its plot, while the second plot felt a bit forced at places. The movie has been titled ‘The Resumption’ which I felt did satisfactory justice if we connect it with the first installment, though being a little extra and not ‘perfect’ or ‘out of the ordinary’ which Georgekutty tries to seek while discussing the plot for the movie he wants to produce.

Drishyam 2 – The Characters and Cast

Georgekutty, played by the unparalleled Mohanlal, is unflappable than ever. The law-abiding simpleton from a village who watched television for hours and found no interest in reading newspapers has now grown in not only investing in movies but also writing the script for them. He involves himself with a veteran scriptwriter, played by Saikumar, to proof-read his script. He is seen using his mobile phone which is linked to the closed-circuit surveillance set-up in his workplace, theatre, and obviously, the police station.

Meena’s portrayal brings no surprise and stays similar to the nervous persona in the first movie. Anju, played by Ansiba Hassan does justice to a young girl suffering from the ghosts from her past. I personally loved Esther Anil reprising her role as Anumol, who has now grown into a chirpy and bit of a rebel teenager, though having a little part to contribute to the plot.

Asha Sarath as Geeta plays the same fiery woman who doesn’t back down till she sees her son’s murderers being punished. Siddique as Prabhakar puts up a perfect pathos as the lamenting father who wants to be reunited with the last remains of his son. He pleads with Georgekutty for the whereabouts of his son’s body, a request from one father to another. This early scene was one of the most emotional scenes in the entire movie. Murali Gopi as the new IG has given an efficient portrayal of a tenacious policeman.

Other mention-worthy roles were Sabu (played by Sumesh Chandran) and Saritha (Anjali Nair), as the neighbors, and a murder convict Jose (played by Ajith Koothattukulam). All three had small but significant game-changing roles in the plot.

Drishyam 2: The Resumption holds the audience to the screen with its cat-and-mouse chase between the police and Georgekutty trying to outwit each other. The slow build-up to the climax seemed a bit forced and somewhat less convincing at places. Drishyam had a way more startling climax which was free-flowing and seemed agreeable to the plot. I will not comment on the script, as I do not speak the language and I watched the movie with subtitles.

As a fan of the first installment, someone who was very satisfied with its ending sat with a reluctant mind and kept a low expectation. But the movie, though with multiple loose-ends, has catered to its fan somewhat satisfactorily in its last one hour with the continuous twists and turns, trying to hold on to the arc of the first installment. Thus, Drishyam 2 is a one-time must-watch for those who have loved the first part in order to cater to their fandom, but maybe avoided later when one wishes to watch Georgekutty and his family again.

While having a conversation with a fellow Malayalee fan, he told the biggest plot-hole or rather an unconvincing part in the movie which he felt was Georgekutty befriending the security guard of the forensic department of Kottayam Government Medical College and waiting all these years while the guy stayed in that same job position all these years without a promotion or transfer (something he felt to be highly unlikely, as many of them are temporary worker!) Let us know what more you found in the movie which left you with questions and an unsatisfying feeling.